Born and raised in a small town in the north of Germany, I moved to Bremen to pursue a Bachelor of Science in Physics at Jacobs University (2010 - 2013). During my undergraduate, I had the chance to participate in the DAAD RISE worldwide internship programme. During my intership at the School of Astronomy and Astrophysics of the Australian National University my motivation to pursue a career in Astronomy was fostered.

For my Master of Science (2013 - 2015) I moved to the University of Groningen in the Netherlands, at whose Kapteyn Institute I had already completed parts of my Bachelor Research Project. There, I gained first observational experience during two observing runs with the Isaac Newton and William Herschel Telescopes at the Roque de los Muchachos, La Palma. 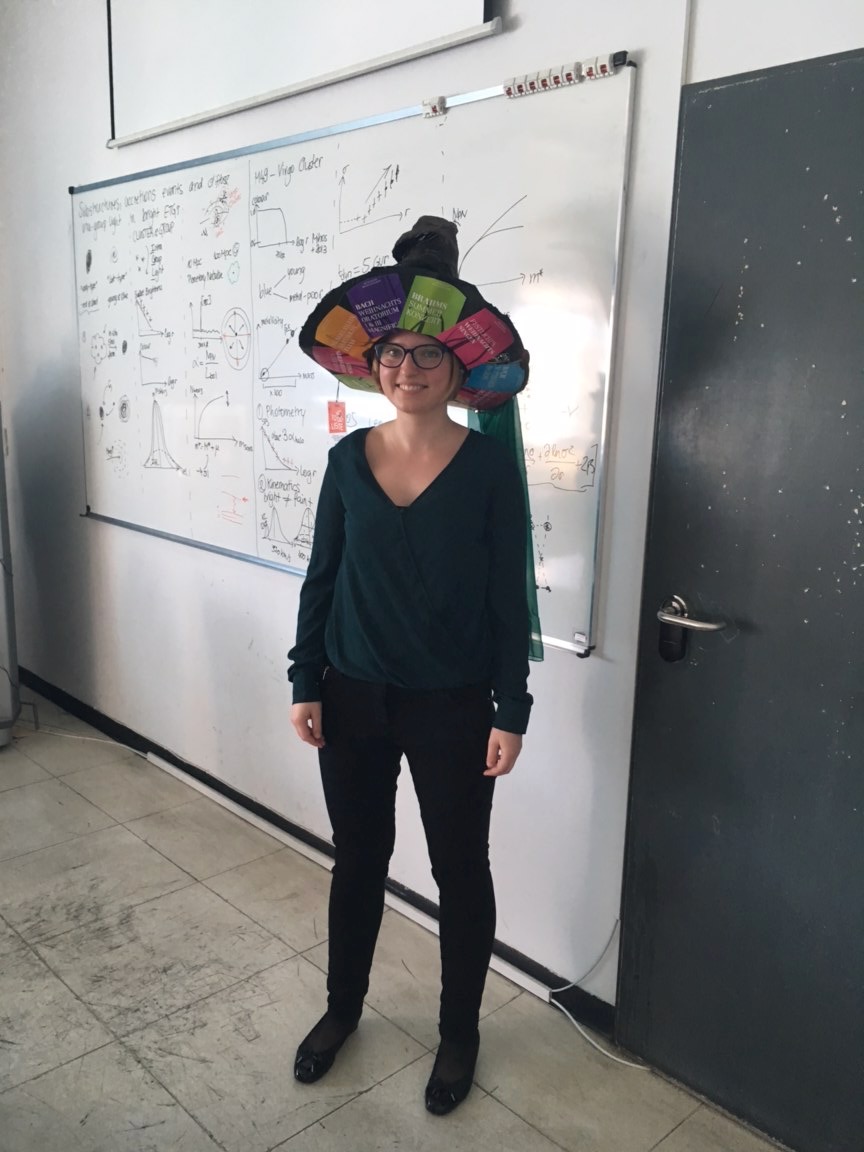 From 2015 to 2018 I was a PhD student at the European Southern Observatory as part of the International Max Planck Research School (IMPRS) on Astrophysics at the LMU Munich. I successfully defended my PhD thesis titled "Substructures, accretion events, and diffuse intra-group light surrounding bright early-type galaxies" in September 2018. In November 2018 I took up a postdoctoral fellowship at the European Southern Observatory in Santiago de Chile with observational duties at the Very Large Telescope at Paranal Observatory. There, I am a support astronomer at UT4, as well as the instrument fellow for the MUSE integral-field spectrograph. You can read more about my time as an ESO fellow and my journey into astronomy in my Fellow profile in the ESO Messenger.

When I am not working on my research projects, one is likely to find me rehearsing music. While living in Munich, I was a soprano in the Münchner Motettenchor (MMC). I also enjoy swimming, bouldering, windsurfing, and reading. Since moving to Chile and marvelling at the southern skies, I took up (astro)photography. Have a look at the gallery on this webpage

I am interested in the formation, evolution, and dynamics of galaxies ranging from our own Milky Way to the most massive galaxies found at the centres of galaxy clusters. In my PhD research I started using Planetary Nebulae (PNe) as kinematic tracers for the build-up of the extended halos of massive early-type galaxies. Below is a selection of current and past research projects that I have been involved in. 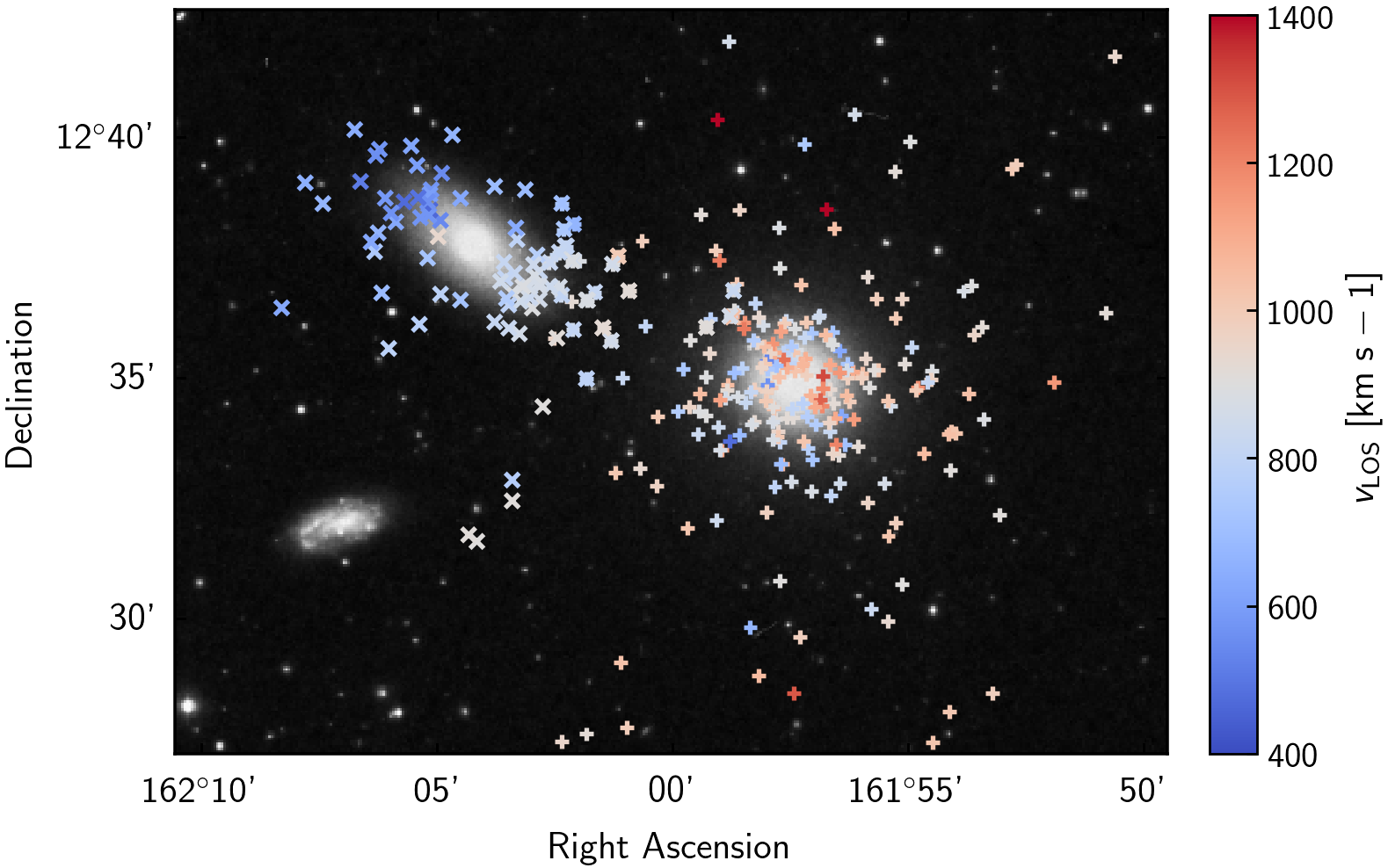 The galaxy M105 in the Leo I group has been at the centre of a long-standing debate on the dark matter (DM) content of early-type galaxies and is one of the poster children of the Planetary Nebula Spectrograph (PN.S) early-type galaxy survey. We have recently obtained more extended photometric and kinematic data to place better constraints on the assembly history of M105 and its group environment. The figure on the left shows the PNe detected in M105 and its companion spiral galaxy NGC 3384 colour-coded by their velocity.

We have performed a novel photo-kinematic decomposition of of our sample into two subcomponents associated with NGC 3384 and M105 using Gaussian Mixture Models and are currently investigating the presence and dynamics of intra-group light in this loose group of galaxies. These new data will also allow us to better constrain the matter content of M105 at large radii. First results were presented in Chapter 4 of my PhD thesis.

I: Wide-field photometric survey of planetary nebulae in the Leo I group 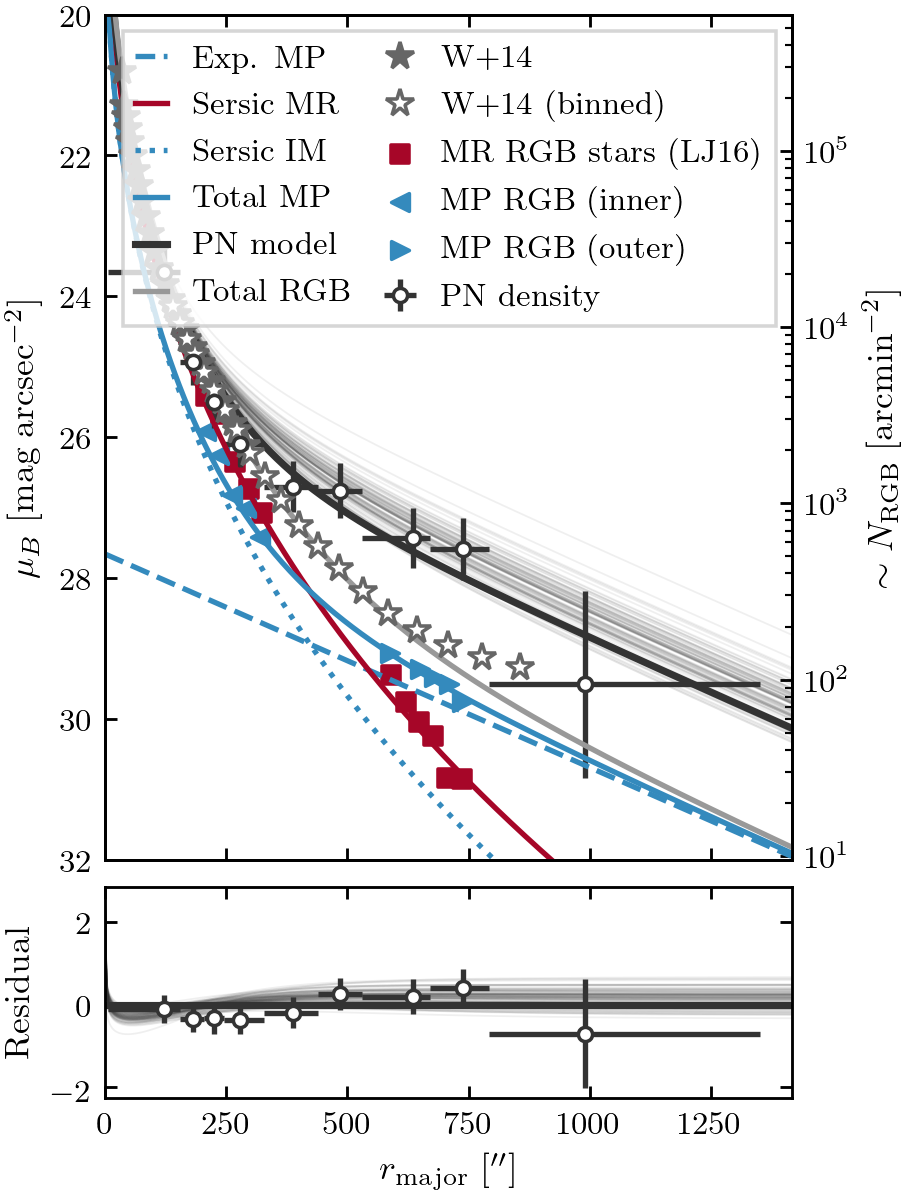 In the first paper of the series, we focused on planetary nebulae candidates identified from Subaru SuprimeCam photometry. Combining the information from planetary nebulae, resolved red-giant branch stars, and integrated broad-band surface brightness profiles, we were able to identify a faint, exponentially distributed population of metal-poor stars in the outer halo of M105. For the first time, we were able to link the presence of this metal-poor population with an increase in the planetary nebula specific frequency, i.e. how many planetary nebulae there are per unit light. This establishes a missing link between metallicity and the post-AGB phases of stellar evolution.

Three dynamically distinct stellar populations in the halo of M49 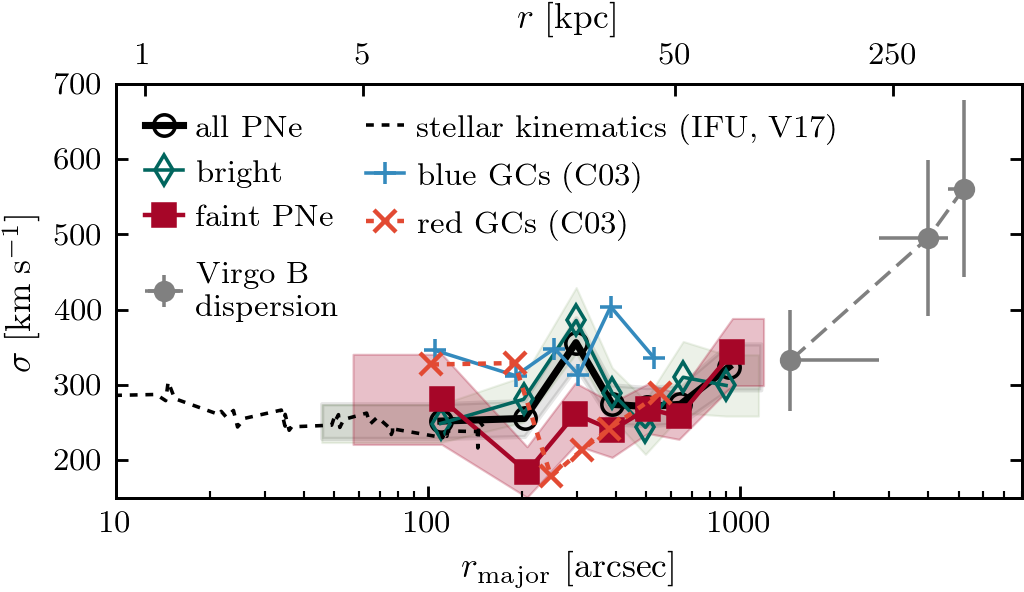 For the second project of my PhD, I investigated the kinematics in the outer halo of the early-type galaxy M49, the brightest galaxy in the Virgo Cluster. As kinematic tracers, we used planetary nebulae. We employed a multi-Gaussian model for the velocity distribution to identify stellar populations with distinct kinematics and histories

We detected stellar-kinematic substructure associated with the interaction of M49 with the dwarf irregular galaxy VCC 1249. We find two kinematically distinct PN populations associated with the main M49 halo and the extended intra-group light (IGL). The dispersion of the PNe associated with the IGL joins onto that of the satellite galaxies in subcluster B at 100 kpc radius. This is the first time that the transition from halo to IGL is observed based on the velocities of individual stars (see Figure on the right). Therefore the halo of M49, consisting of at least three distinct components, has undergone an extended accretion history within its parent group potential. 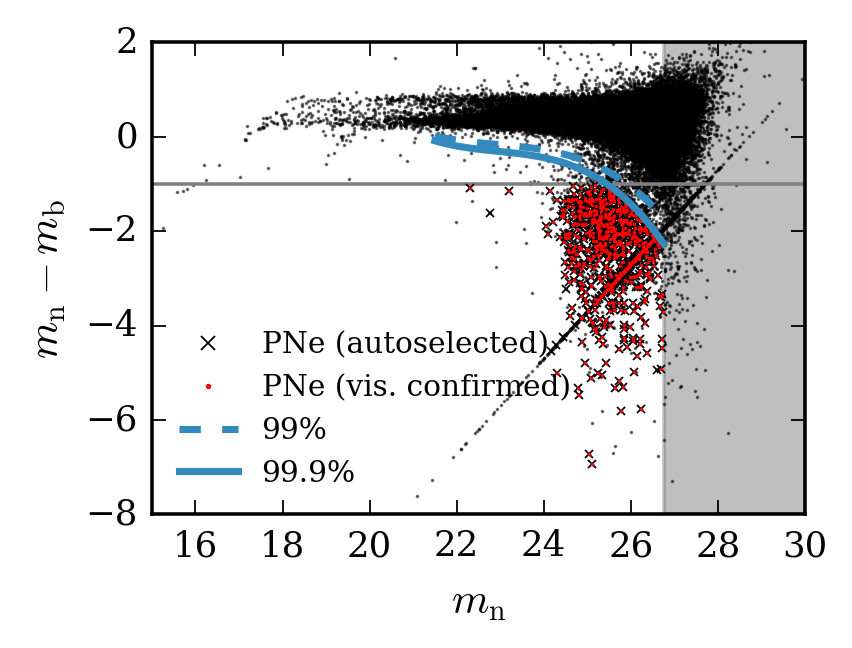 Prior to our work on the kinematics of M49, we carried out a photometric survey with the aim to detect PNe in the halo of this galaxy. PNe were identified based on their bright [OIII]5007 Å emission and absence of a broad-band continuum through automated detection techniques. We identified 738 PNe out to a radius of 155 kpc from M 49's centre from which we define a complete sample of 624 PNe.

Comparing the PN number density to the broad-band stellar surface brightness profile, we find a variation of the PN-specific frequency (α-parameter) with radius. The outer halo beyond 60 kpc has a 3.2 times higher α-parameter compared to the main galaxy halo, which is likely due to contribution from the surrounding blue IGL.

For my Master Research project, I studied the two Local Group dwarf galaxies Ursa Minor and Draco. These two galaxies are an interesting pair to study, since they are similar in terms of mass, extent, and distance. However, while Draco appears to have a perfect, undisturbed stellar distribution, Ursa Minor shows signs of tidal disturbance. Using new optical spectroscopic velocity data, we applied orbit-based Schwarzschild modeling to constrain the (dark) matter distribution of the galaxies. 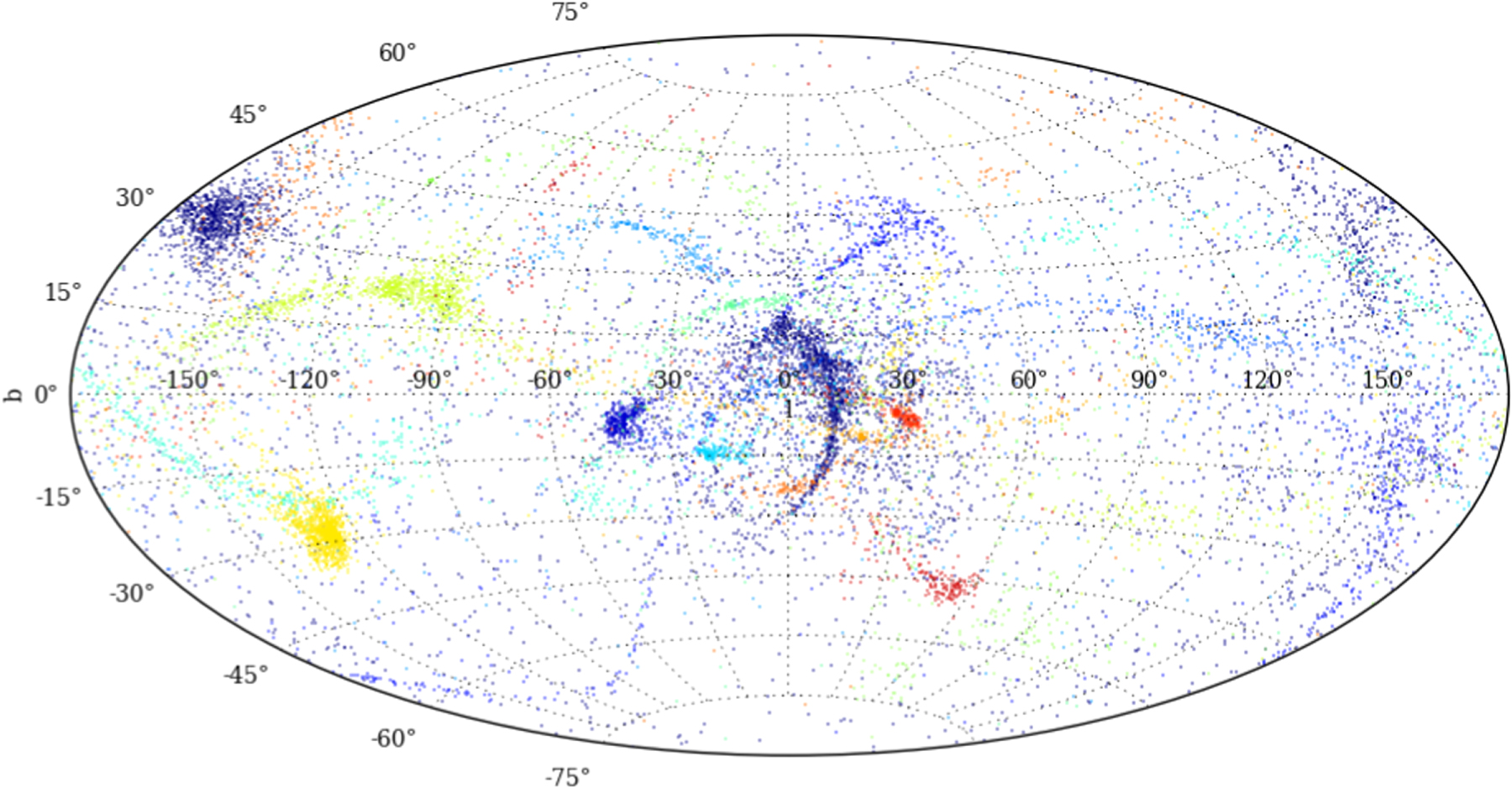 This project, lead by Dr. Robyn Sanderson, built on my Bachelor Research project, in which I investigated how to determine the gravitational potential of a cosmological dark matter halo using stellar streams. We determined the best-fit potential parameters by maximizing the amount of clustering of the stream stars in the space of their actions. We show that using our set of streams from the Aquarius Simulation, we recover a mass profile that is consistent with the spherically averaged dark matter profile of the host halo, although we ignored both triaxiality and time evolution in the fit.

Since moving to Chile and regularly marvelling the southern skies, I have taken my first small steps in (astro)photography. Below you can see some of my favourite shots from Paranal on Flickr: 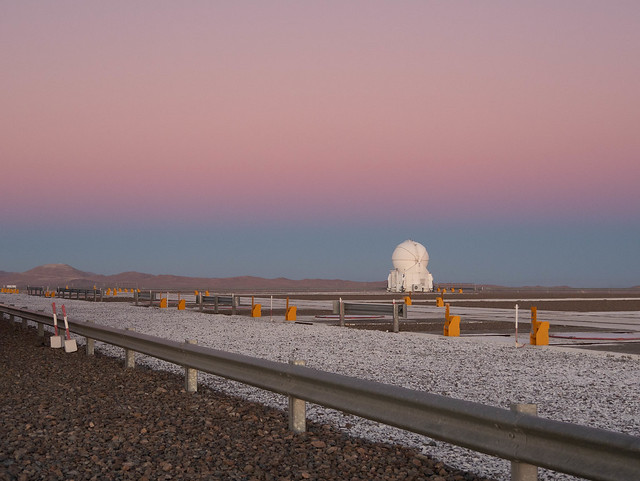